“Only the Lonely…” and “What becomes of the broken hearted? Who have love that is now departed?” Those songs were spot on for me. What about you?

I was just reading an article that suggests that the risk for heart attack or stroke goes up during the first few weeks of bereavement.

“Our study shows the likelihood of a heart attack or stroke doubles in the crucial 30-day period after a partner’s death for those experiencing loss of a loved one,” said study co-author Sunil Shah. “Bereavement has long been known as a risk factor for death. Prior work has suggested that grief has a direct negative impact on blood clotting risk, blood pressure, stress hormone levels and heart rate control,” said Shah, a senior lecturer in public health at St. George’s University of London in England.

The study was focused on partner loss but I believe that it applies to all situations when your heart gets broken. Mine still has lots of holes from when my son died, my parents, my sister-in-law, my brother, my friends, etc.

How many of you have known people who’ve had a grandparent or parents who died very soon after the death of his or her spouse? Jeanne, my cousin John’s wife lost both of her parents within minutes of each other. Not because of an accident either. They were both ill and one, the dad I believe, was in the hospital for a few weeks or months. The mom was too ill to go see him much. One day she had to be taken to the hospital and the daughters asked that they be placed in the same room. The staff rolled the mom in on a gurney and put it right next to the dad’s bed. He looked at her and tried to touch her as a tear trickled from the corner of his eye and he died. She took one look at him and realized what had just happened closed her eyes and she died too. This is an extreme case but my husband’s grandmother passed away and within hours his grandfather started running a fever and was gone within a day or so. My mom died three months after my dad but she had worn herself out by taking care of dad so when she got bronchitis her body just didn’t have the energy to heal.

Bottom line here is that grief takes a huge toll on our bodies. So if you are dealing with an impending death please take care of yourself too. If you have already experienced the death – be sure to get some help, lots of sleep, exercise and eat healthy foods. Try not to hibernate alone. Reach out to friends and family. If you are the child of a surviving parent or a sibling who has experienced a death of a sister or brother….or a parent, aunt, uncle or friend of a child who has died be there for others by pushing an active social life, grief support and lots of exercise and healthy food consumption.

I also want to make a stronger case for talking about your feelings. If you are not a group person or you don’t want to talk to a professional just find someone who will listen and not judge. Someone who will be there to let you cry or be angry or whatever…take charge of your grief. 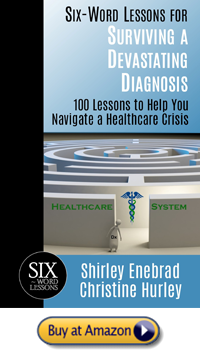 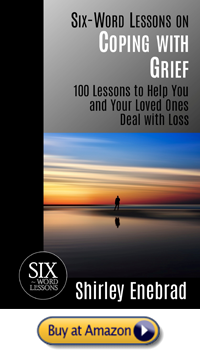 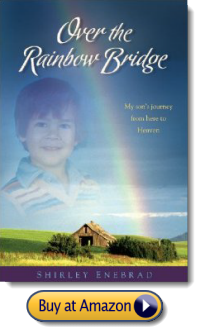 This primer on grief is practical , honest, and totally on the money about feelings, thoughts, and behaviors which are part of the human experience of grief and loss. The six word lessons are understandable, strengthening, and probably because there are only ‘six words’ easily remembered. It also takes direct aim at the guilt experienced about ‘the need to talk about it’.

This book on coping is such a gift. It’s a quick, concise read that any busy, grief stricken person can benefit from. Knowing that the writer has experienced grief is powerful, she has walked down the lonely, painful journey herself. Thank you for this book as we grieve the loss of my beautiful mother-in-law!

Over the Rainbow Bridge is an intelligent and emotional book that exhibits an unforgettable life and death of a child wise beyond his young years. You don’t have to be grieving to get Cory’s life lessons.

Shirley, I can’t tell you how much your book touched my life. Your son was an amazing boy-such an upbeat, inspiring, beautiful little boy… although I cried, I also celebrated the person he was. And your writing made me feel like I was a part of your life with your son, instead of just reading about it. Images came to mind. Like when you had to walk that long distance to the hospital with your son in your arms after your car broke down. There were so many others… and the laughs I had with the ghosts!  The feelings I experienced while reading –I … END_OF_DOCUMENT_TOKEN_TO_BE_REPLACED

The written word can be very powerful and moving, and every so often there is a book that can truly change lives; Over the Rainbow Bridge is that important. It is a true account of a heroic child’s mission in his short life to teach us about love and life, that one and both are the same: eternal. In our culture, where death is almost a taboo subject, Over the Rainbow Bridge will help us confront our fears and embrace life in a “down to earth” way. It is accessible, a comfort to read, as if being embraced by an old friend.

I just have to tell you that your book has become a part of me.  I have milked it by only reading it when I was alone and quiet.  I feel I know little Cory now.  It has been a privilege getting to know his sweet spirit.  Thank you so much for sharing a small part of him with me.  I would love to see the video that was made.  Bless your heart for the pure love and strength that you instilled in your sweet baby.  Cory is a true gift to all who get to share his story.

The greatest gift I received from reading “Over the Rainbow Bridge” is a comforting peace about death and dying. Death is not an ending, but the beginning of a new phase. Powerful. Thanks Cory for your wisdom.Through the life of this 9 year old boy, I learned more insights about heaven and the afterlife than I ever learned by attending church. I don’t know who I’m more impressed with—Cory, a young man who even in death was the most positive, inspirational person I never met; or his mother Shirley who had the courage to really list… END_OF_DOCUMENT_TOKEN_TO_BE_REPLACED

Over the Rainbow Bridge is an intelligent and emotional book that exhibits an unforgettable life and death of a child wise beyond his young years. You don’t have to be grieving to get Cory’s life lessons.

Cory was my favorite patient ever and he taught me more than I could ever teach him. His lessons about Summerland (the afterlife) were profound and his drawings of what he saw ‘Over the Rainbow Bridge’ helped thousands of people get in touch with their long-buried emotions.

Books are often described as good, exciting, motivational, or inspirational. Rarely do you find one that is truly life transforming. ‘Over the Rainbow Bridge’ is just such a book. It is absolutely miraculous the impact the story of this little nine your old child had on my perception of life, death, and God. My life has been inspired and enhanced by Cory’s story. If you are depressed for any reason, you will have a change of heart and mind after reading how Cory dealt with every day life in the short time he was here on earth. I can hardl… END_OF_DOCUMENT_TOKEN_TO_BE_REPLACED